Last week, a friend took me to explore and photograph an old house on her farm property.

This house, although dilapidated by time, nature’s elements, and artifact/materials scavengers over the years, still stands tall and proud on the Canadian prairie. The brick that adorned her is all but gone but one can certainly imagine what that red brick must have looked like, glowing in those prairie sunrises and sunsets

This once-majestic farm house was the home of James Auburn Pepper  (1915-1985) – a farmer and then political figure in Saskatchewan.

As we explored her both inside and out, I couldn’t help but wonder what stories she could tell us about her glory days.

The structure was an Eaton’s House. These houses played an integral part in the rural development of Western Canada in the early 1900’s. The purchaser could order the blueprints and materials from (you guessed it!) the Eaton’s Catalog, and the materials would arrive, usually by rail, to be assembled by the owners and either volunteers or hired men. I can’t help but think that this concept was a precursor to pre-fab homes.

I doubt that, when she was built, the owners had any inkling of the oil boom that would start in south eastern Saskatchewan in the mid 1950’s to early 1960’s or that oil would be discovered, drilled, and pumped right on the property.

In order to view each floor on our way to the attic, we navigated 3 flights of stairs littered by fallen debris. As we climbed each rotting flight, I was more than a little anxious that one of us might fall through a decayed step. Such is the thrill of the chase when exploring ruins.

The knob and tube wiring that powered the house was quite sufficient for the time before numerous electrical appliances and devices.

The kitchen cabinets were sparse by today’s standards, but were no doubt adequate for the time. After all, this was no small house so nothing would have been spared in her design. There was even a dumb waiter shaft, but I was unable to get good enough lighting for a clear shot and the flash photos I tried weren’t that great with the 50 mm prime lens, which was all I had with me that day.

All window casings had remnants of the rope and pulley system that was used to provide ventilation on the hot summer days before A/C. 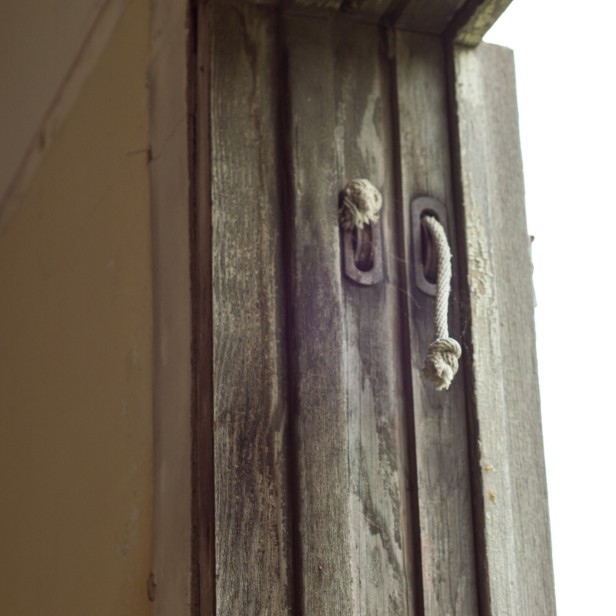 The house is threatened to be taken over by vines, but this adds an element of mother nature reclaiming her space over time.

Of the entire shoot, this last photo is my fave. Over the years, how  many thumbs pressed this latch to open the door and what was the business of each person who entered? “It was a mistake to think of houses, old houses, as being empty. They were filled with memories, with the faded echoes of voices. Drops of tears, drops of blood, the ring of laughter, the edge of tempers that had ebbed and flowed between the walls, into the walls, over the years.
Wasn’t it, after all, a kind of life?
And there were houses, he knew it, that breathed. They carried in their wood and stone, their brick and mortar a kind of ego that was nearly, very nearly, human.”
― Nora Roberts, Key of Knowledge

2 thoughts on “This Old House”

This is a text widget, which allows you to add text or HTML to your sidebar. You can use them to display text, links, images, HTML, or a combination of these. Edit them in the Widget section of the Customizer.
%d bloggers like this: