From Mission St Xavier del Bac (covered in a previous post), we headed out to Old Tucson. Just minutes from Tucson, at the base of the Tucson mountains, this attraction has been the site of more than 400 western films and productions since it was built in 1939. If you’re a fan of old western movies or TV shows, chances are good that they were filmed here.

This old west town is more than just fake front facades – many of the buildings have full interiors to explore and enjoy. 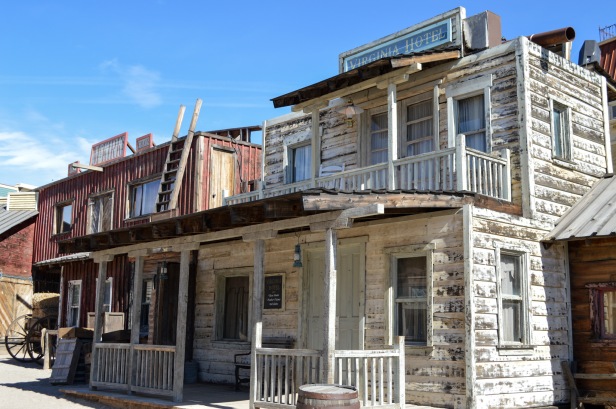 The entertainment factor is alive and well on every street and inside many of the buildings with gunfights, can-can girls, stunt actors and comic productions that capture the old west.

There are trail rides, stagecoach rides, train rides, and a western history educational program which includes contributions from both Arizona pioneers and Native Americans.

There are many food establishments with everything from BBQ to Nostalgic Candy and everything in between.

The living history is enhanced by characters in the streets who are more than willing to stop and answer any questions. Fun photo ops abound!

There are many spots to relax as you stroll through the streets, “countryside”,  and alleyways – and you never know who you might run into on your walk. The Reno steam locomotive appeared in over 100 movies and TV shows, and the ranch home of the TV series High Chaparral is intact and a short jaunt from “town”.  A visit the to Grand Palace Saloon and Hotel for entertainment and refreshments takes you back in time and memories abound from movies that featured this grand old establishment. If I had to choose between Tombstone and Old Tucson, I’d have to say the latter would win hands down just because of the wide variety of things to see and experience. Of course, if you can see both, by all means do, as they each have their own part in old west history. We spent a full afternoon at Old Tucson Studios, and could have easily spent an entire day.

I recently read that if you can’t visit Old Tucson Studios, if you’ve seen a John Wayne movie, you’ve already been there.

“I won’t be wronged, I won’t be insulted, and I won’t be laid a hand on. I don’t do these things to other people, and I require the same from them.”

This is a text widget, which allows you to add text or HTML to your sidebar. You can use them to display text, links, images, HTML, or a combination of these. Edit them in the Widget section of the Customizer.
Loading Comments...
%d bloggers like this: